to the Snowiest place on earth

Have you ever been to a theater where a sheer curtain is draped across a set, the actors in front, but a different set is just barely hidden behind? As you set out on the bike this “sheer curtain”, a translucent cloud, drapes across the sky, the light diffused, The Mountain just out of reach and far to the east a sliver of cobalt blue.

Being that it is a holiday weekend the lines are long to get into the park, sitting in the line the sun beams penetrate the veil and you unzip your jacket moving from shadow to shadow not to overheat. Water tendrils gently cascade down a moss filled rock ledge, a weeping hillside. Just the sight is refreshing and reminds you of one of the names for Mt. Rainier, mother of many waters.

At the base of The Mountain, towering dark fir trees absorb the light from reaching the forest floor and the sweet smell of fir mixed with loamy soil fills the air. Then, as if a star is born, a bright spotlight reaches through and radiates the chartreuse leaves of a single vine maple on this forest stage.

Flowing over silt filled glacial rivers and through the switchbacks up the mountain side a blast of frigid air reveals that you have now crossed over the snowline. Layer upon layer of compact snow begins to rise on each side of the road creating a culvert in which to ride. Winds push across the ice and snow chilling the air as you tighten up your gear.

Winding around a bend, the mountain comes into view. You are always drawn to The Mountain, but today the dark swirling clouds and jagged slate rock give you the feeling that this can be a treacherous place, beautiful and peaceful one moment and stormy and deadly the next.  Climbing off the bike you move to the stillness and safety of the lodge and the scent of a cozy fire. Other travelers are enjoying a tranquil respite in leather couches mesmerized by the flickering flames on the logs in the grand fireplace.

Looking out the window you see only a shear wall of snow. These snow walls act as buffers to the wind, smells and sounds that are familiar at the mountain. It is strangely quiet, odorless and still. This area has held the world record for snowfall in a single year, but this year you are thankful you can get to a place to see over the towering walls of white to glimpse the majesty of Mt. Rainier and the Tatoosh Range.

You head down the mountain on the road less traveled, toward Sunrise and Cayuse and Chinook Pass. The winter is hard on these roads which just opened for traffic two days ago, but it is a beautiful ride and you get to see The Mountain from a different view. Unobstructed slopes, single lane road, rough tarmac and the like do not dissuade your need for adventure. On you go.

Through rock hewn tunnels, cascading waterfalls, a marmot peaking over a snowbank and deer crossing the road you continue to the switch backs rising up to Cayuse and Chinook. Off in the distance Mt Adams and Mt St. Helens look like little sisters to Mt Rainier. The sheer veil of earlier in the day begins to swirl into dark and threatening formations as you travel off the mountain to warmer weather. 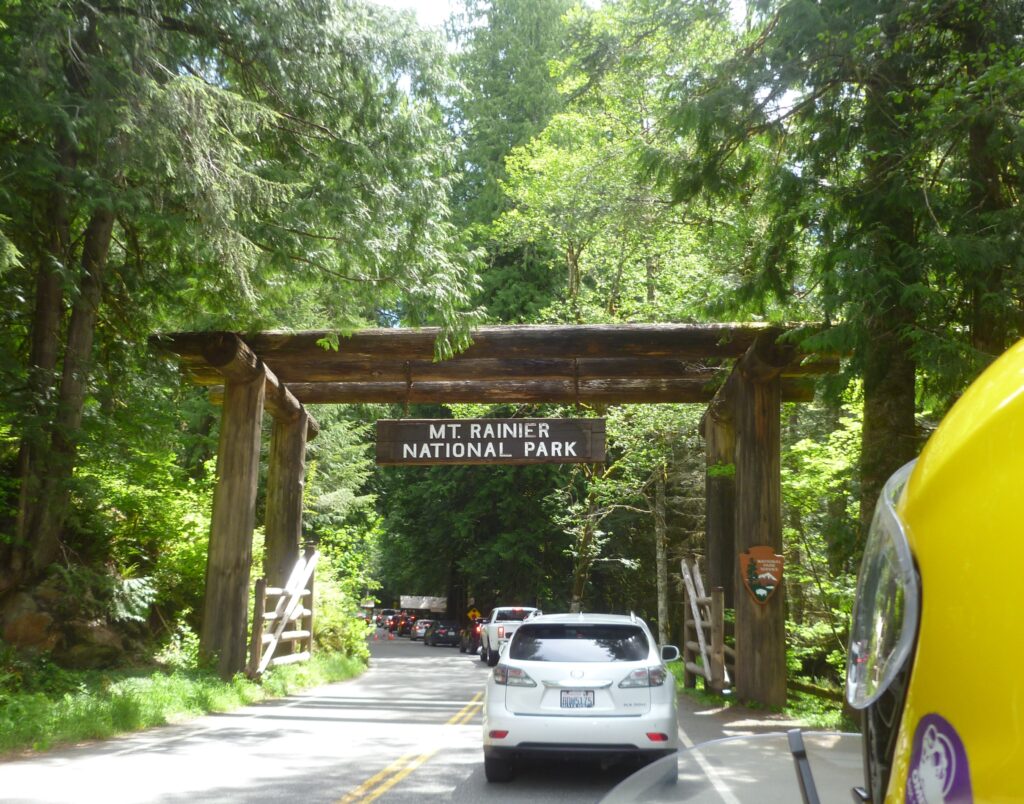 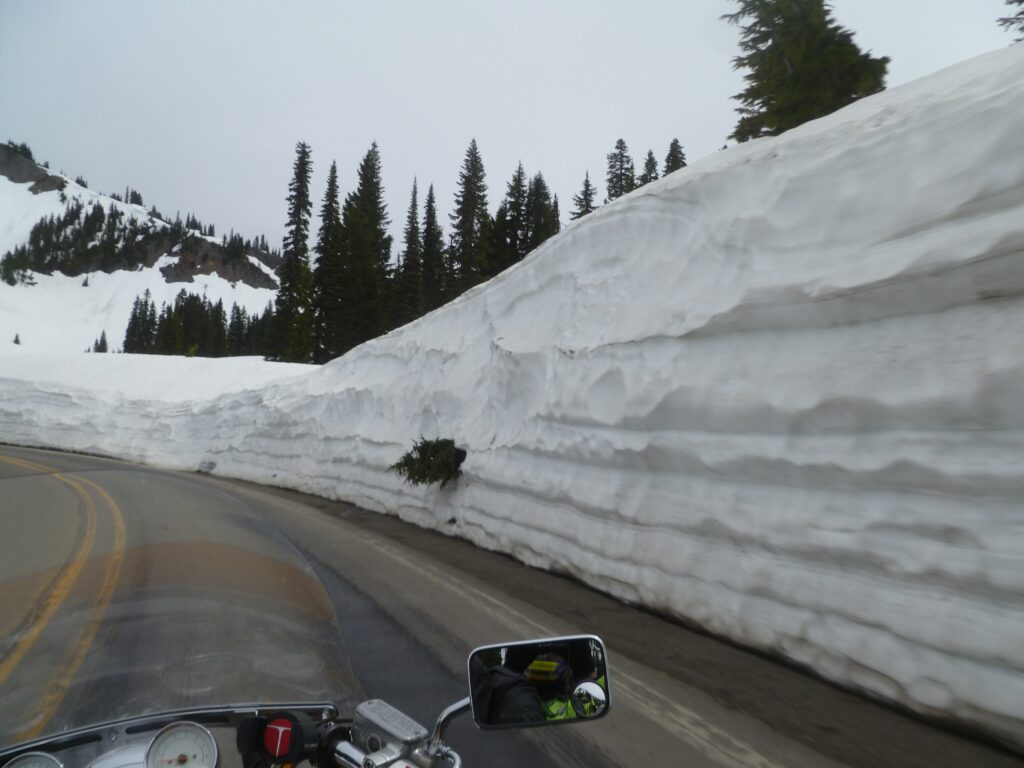 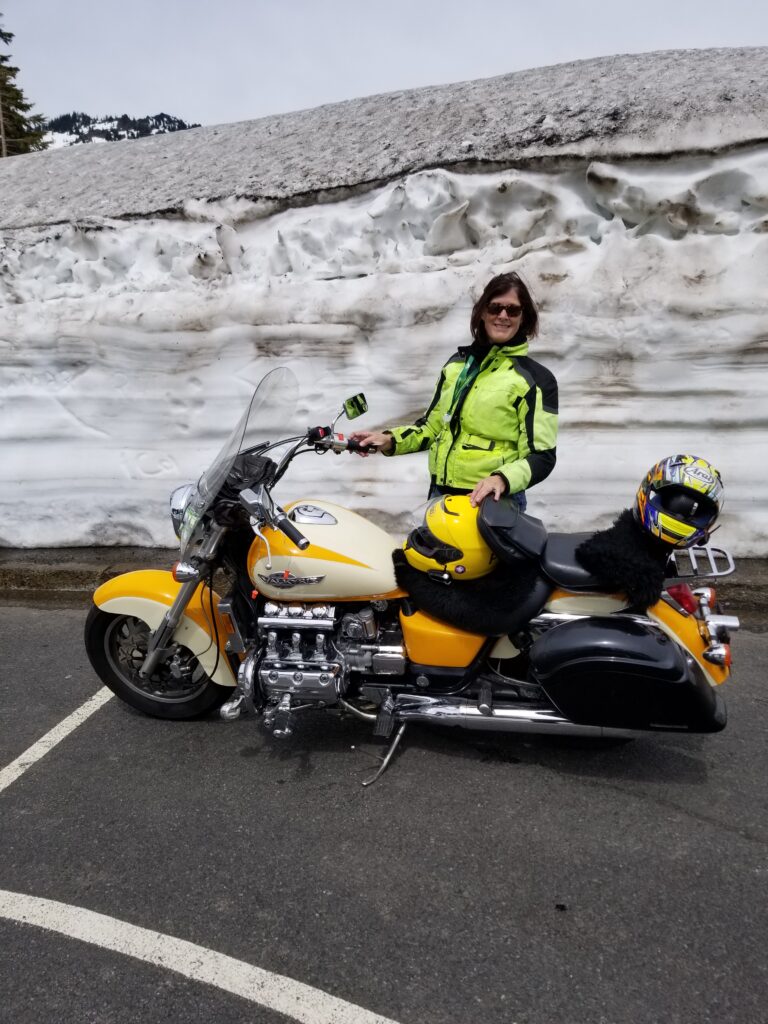 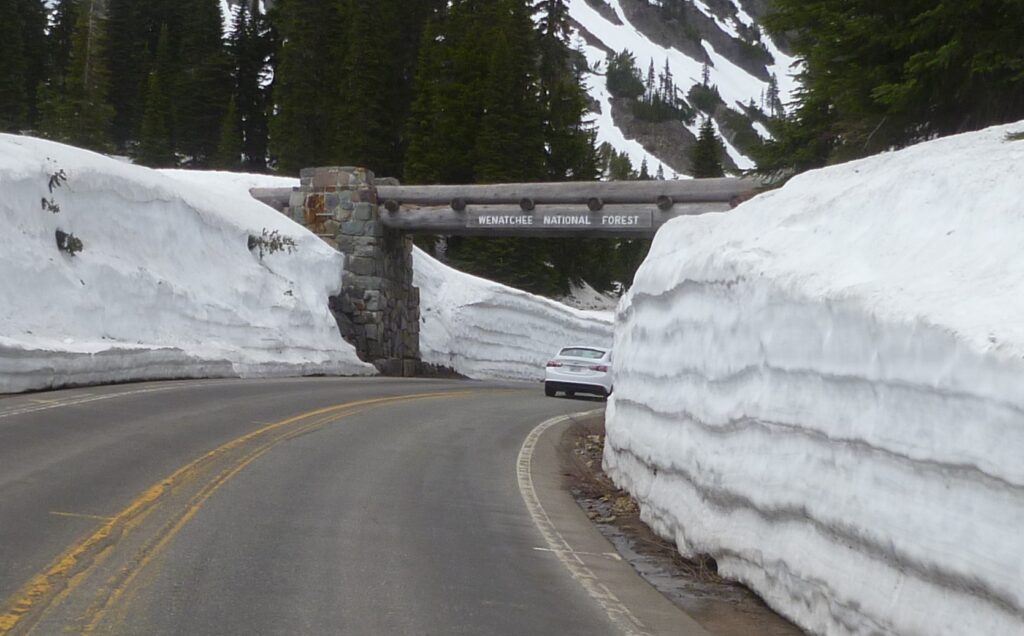 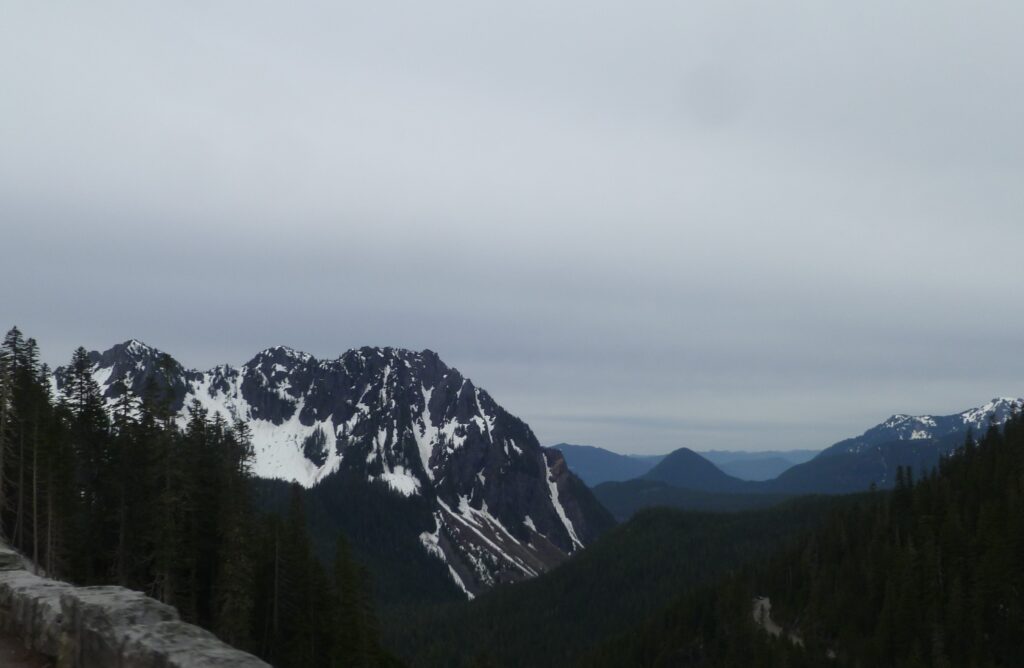 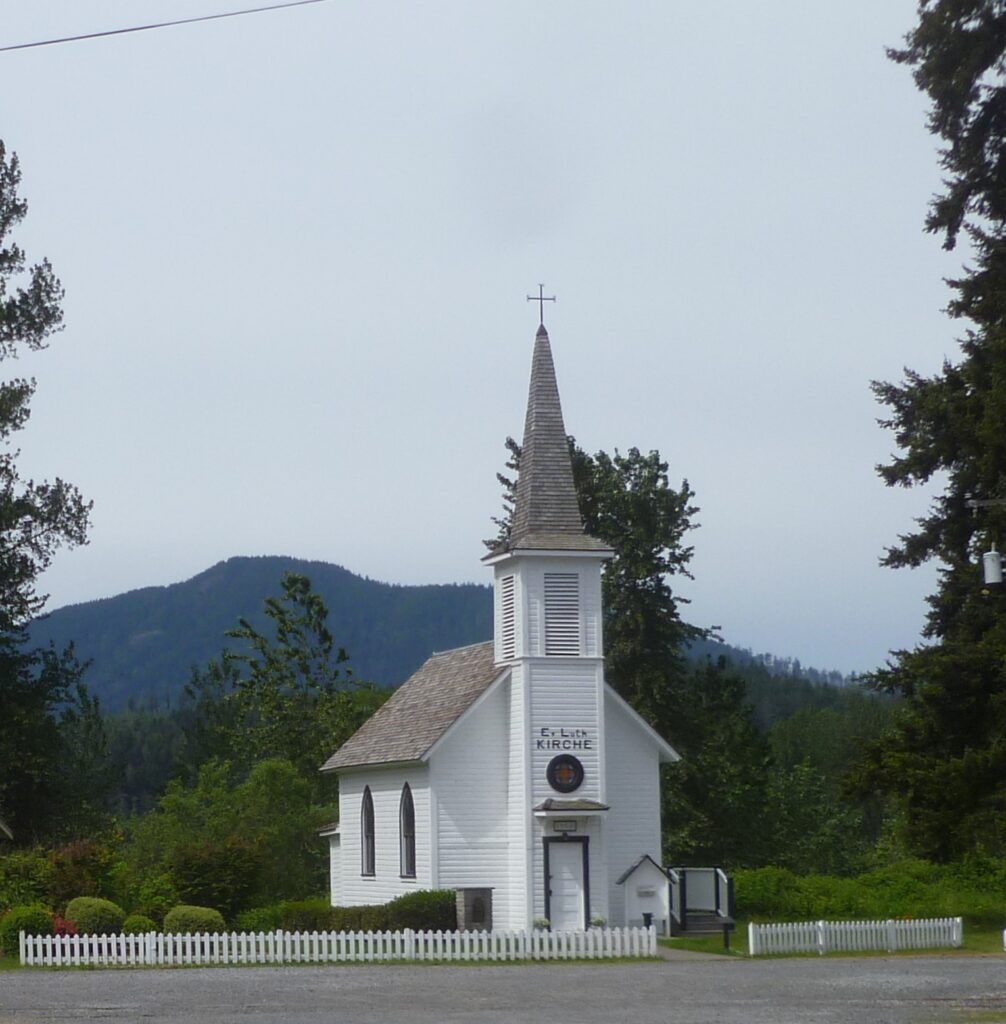 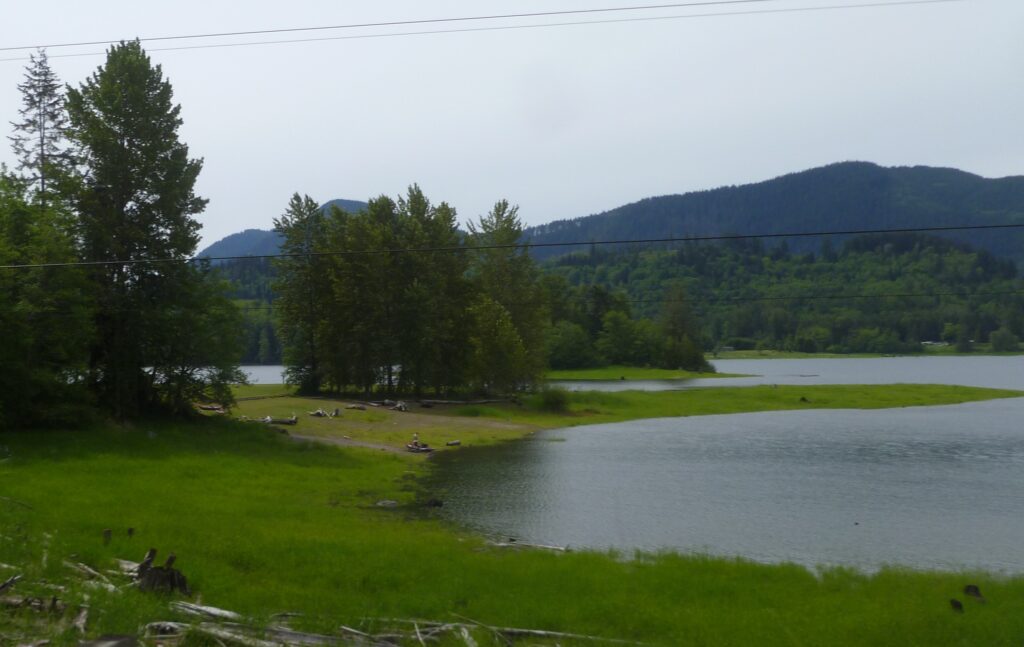 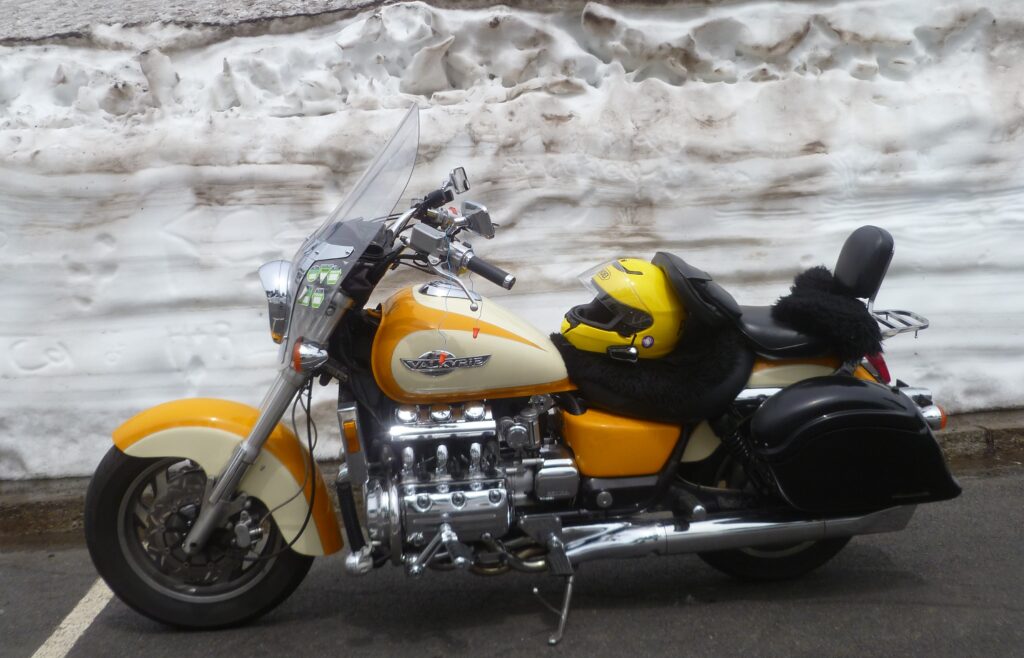